The legacy of Felix Bernstein 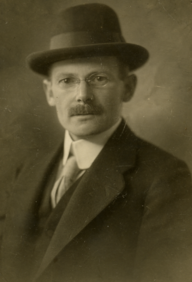 Felix Bernstein (born 24 Feb. 1878 in Halle/Saale, Germany; died 3 Dec. 1956 in Zürich, Switzerland) was a mathematician and statistician. He is best remembered today for two results which already indicate the breadth of his research: (1) the Schröder-Bernstein Theorem of set theory, which he found as a young student at Halle, and (2) the correct hypothesis for the genetic transmission of the human blood groups, which he worked out in 1924 on the basis of the available statistic material.

His years of studies led him to Italy, to Munich, Halle, Berlin, and finally to Göttingen, where he obtained under David Hilbert's supervision his Ph.D. with a thesis in set theory in 1901, and his second thesis (habilitation) in 1903. In the following years he developed increasing interest in insurance mathematics and statistics. After an interlude as lecturer in his hometown Halle, he was appointed in 1907 director of the mathematical branch of the Göttingen Seminar für Versicherungswissenschaft. As of 1911 he also obtained a formal appointment as (planmässiger ausserordentlicher) professor for mathematical statistics at Göttingen. As of 1919, Bernstein directed the newly created Institut für Mathematische Statistik at Göttingen. 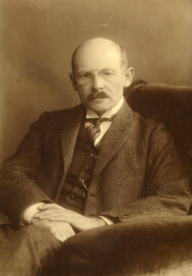 Felix Bernstein was born into a Jewish family of considerable intellectual as well as political tradition. After WW I he was one of the founding members of a new left-liberal party (DDP), and he devised the first state loan of the Weimar Republic. This pro-democratic stance would contribute to considerable difficulties he had within the Göttingen faculty during the 1920s. After Hitler's rise to power he lost his position and emigrated with his family to the US, where he had great difficulties finding an adequate position, not the least because of the truly interdisciplinary nature of his research.

Bernstein published his research on blood groups in the medical journal Klinische Wochenschrift (vol. 3, 1924), and in the journal of genetics Zeitschrift für induktive Abstammungs- und Vererbungslehre (vol. 37, 1925). He summed up most of his biomathematical work of the 1920s in his contribution to the Handbuch der Vererbungswissenschaft edited by E. Baur and M. Hartmann, vol. I : Felix Bernstein, Variations- und Erblichkeitsstatistik. Berlin 1929. Here, among many other topics, one finds (pp. 48 - 52) Bernstein's subtle remarks about the idea (due to Sturtevant in 1913) of introducing a metric on the genome via cross-over probabilities, which was later pursued further especially in Great-Britain, for instance by J.S.B. Haldane.